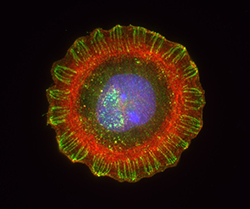 Cell migration is often deregulated in human diseases, such as cancer. We are studying a group of proteins known as the RHO GTPases and our aim is to understand how signalling through RHO GTPases contributes to cancer cell migration. Our long-term goal is to discover proteins and genes that can function as targets for cancer therapies that prevent cell migration and metastasis of cancer cells.

These proteins have been linked to cancer and it is therefore of great importance to identify their kinetic properties in order to understand how this can influence cancer cell migration, invasion and metastasis. In our research projects we aim to:

The ultimate goal is to identify proteins and genes that can be targeted with drugs to reduce the increased potency for invasive growth and metastasis of cancer cells.

The role of MIRO GTPases in neurological diseases

We are also studying a group of proteins called MIRO GTPases that we originally identified in a screen for novel RHO GTPases. Subsequently, we found that they can be classified as a unique subfamily of GTPases. MIRO GTPases contain two putative GTPase domains separated by calcium-binding EF hands. We have shown that MIRO GTPases are part of the mitochondrial transport machinery and our current focus is on their role in neuropathology.

Read more about our projects