Our research in images

Here you can find amazing images from IGP researchers. 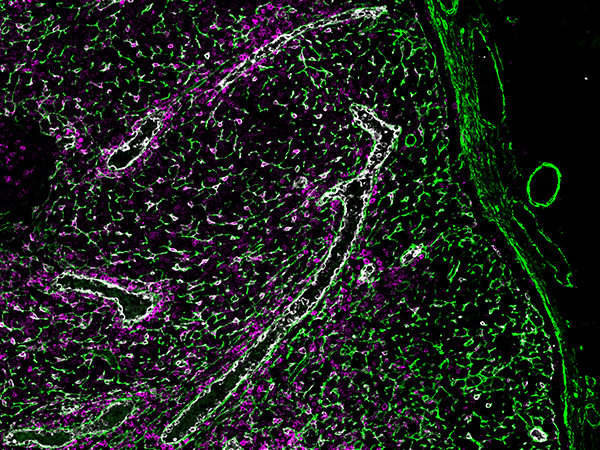 Our body’s lymphocytes need to find their way to the lymph node in order to become activated to fight cancer cells. The lymph nodes' specialized blood vessels; the high endothelial venules (HEVs) and the vessel lining fibroblastic reticular cells (FRCs) form the roads and road signs, respectively, allowing them to do so.

While remodeling of HEVs, including dilation of the vessels, have been indicated in earlier studies, it was earlier not known if and how they were linked to changes in perivascular FRCs or to different types of human cancer, which we can now clearly demonstrate. A further unexpected finding was an accumulation of CCL21 saturated lymphocytes around the dilated HEVs, which was associated with loss of the glycosaminoglycan heparan sulphate (HS) on the perivascular FRCs. HS is needed for immobilization of chemokines to the extra cellular matrix and to the surface of cells, which is important for effective immune cell migration. Without HS the ability of immune cells to navigate will be affected.

Our analysis also shows that the changes to the HEVs are present even before the spread of the cancer to the lymph nodes (i.e. pre-metastatic changes). The latter could be a contributing factor to why lymph node metastasis is so common in breast cancer patients.

We are now working to understand the detailed mechanisms behind dysregulation of the lymph node vasculature, in breast cancer and other tumor types and are evaluating if changes in LN HEVs and FRCs will be useful as biomarkers in human cancer by using AI-driven image analysis.

Tove is a PhD student in Maria Ulvmar’s group at the Rudbeck Laboratory. She studies the role of the lymph node specialized vasculature and stroma in disease and homeostasis by image analysis using human biobank material and mouse models.

Previous pictures in Our research in images

Visit the Our research in images archive